Skip to content
Where Are Those Great High Tech High School Badminton Club Members Now?
By Kelsey Paul
It comes as no surprise that High Tech’s 2014 graduates continue to hone their skills throughout their college careers. And, those from the Badminton Club are no different. Some participate on competitive badminton teams and intermurals. “It’s pretty popular; it has around 60 members, a dedicated section of the Werblin Recreation Center with a total of three courts,” says Jackson Luis, a freshman at Rutgers University in New Brunswick. Others take to a lighter route, like the freshman at Hawaii Pacific University, Kayleigh Rogers. “Yeah, I play recreationally with some kids who played in high school. There’s no intramural program for it; we just play outside in an open field.”
Whatever form of the game the former High Tech High Badminton Club members take to, they all have the same fiery passion they had when they first held the racket in their hand their first club practice at High Tech. However in college, the stakes have been raised and the competition has been heightened. “While practicing, I'm always focusing on form and footwork--2 important fundamentals I ignored in high school. There are so many high-level players here, and they're always giving me tips on how to improve my game play. The coaches say I’m good, but it'll probably take a year in order for me to become good enough to make the team due to the competition,” says Garrett Chu, a freshman at Rutgers University Business School. Yes, the foot work may matter more, and, yes, college badminton may be more stringent than high school badminton. But, many will attest to the “footing” in badminton they received while at High Tech being a positive building block. “The badminton program she [Ms. Gilmartin] has going on at High Tech is, believe it or not, better than Colgate. We have a small student-run club and everything is basically self-supported,” says Mark Ma, a freshman at Colgate University. Ms. Gilmartin, the glue that keeps Badminton Club functioning and expanding, has made great strides to give her students the best resources to excel. She even managed to get the Hummersknott/Oxford Badminton club of Darlington, United Kingdom to come compete with High Tech’s Badminton Club during the summer of 2013. This meeting provided students the chance to exchange badminton tips and to form an international friendship. Ms. Gilmartin prepares her students for a competitive world but also teaches that kindness and friendship extends beyond the perimeters of High Tech. It extends to accepting people from all walks of life. “Going off my experience in joining the Badminton Club at High Tech, I wasn't surprised by how easy it was making friends at my college's Badminton Club,” says Toshi Piazza of Rensselaer Polytechnic Institute in Troy, New York.

So, the High Tech graduates of 2014 have fared well both academically and in their badminton performances. They have practiced form. They have drilled over and over again. They have made friends. And, they all got their start from the quaint and dedicated High Tech Badminton Club. Still, Mark Ma, would not be the troublemaker that he is if he didn’t offer his little tidbit to Ms. Gilmartin and the rest of the club. His suggestions? “Get better nets and, for the love of God, get the lines right next time!” Okay, Mark Ma, Badminton Club will get the lines right this time around.

Here's to the bright futures of all High Tech’s students! 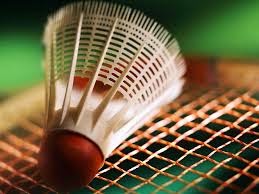