Skip to content
(November 15, 2017--North Bergen, NJ)  For three nights, November 15th-17th, High Tech Musical Theatre students performed the classic Stephen Sondheim/James Lapine musical Into the Woods in the black box theater at the North Hudson Center, announced Dr. Joseph Giammarella, Principal of High Tech High School.
The musical's narrator details a story that intertwines the plots and characters of several Brothers Grimm and Charles Perrault fairy tales, and the narrative involves a childless baker and his wife and their quest to begin a family.  They interact with other storybook characters during their journey, as well as a witch, who has placed a curse on them.
More than 30 performing arts students brought the production to life, either on stage or behind the scenes.  Directed by High Tech’s Musical Theatre instructor John Zisa and Sean Cameron, Into the Woods employs minimal sets, costumes, and props to bring the narrator’s story to life.  The company of the show remains on stage throughout the entire production, even when not performing in a scene, and follows along from scripts on music stands, as a metatextual reminder to the audience that they all participate in the story.
Next up for High Tech Musical Theater, a production of the Elton John/Tim Rice Disney musical, Aida, which debuts March 22nd.  Tickets for Aida go on sale in early February at www.hthspa.booktix.com. 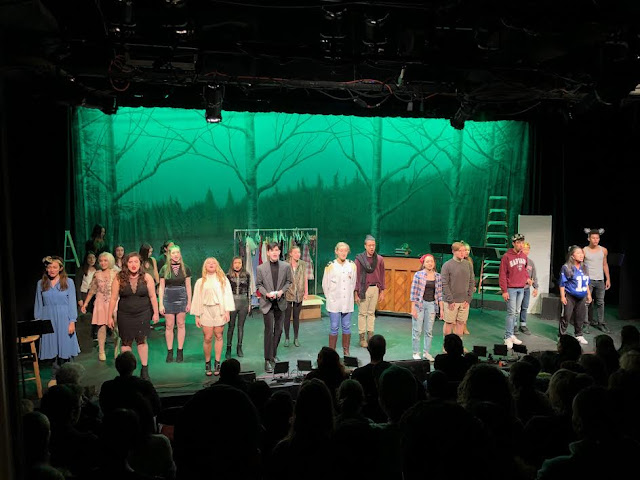