The results are in for the Jersey City Medical Center/Barnabas Health STEM Showcase, held on Monday, February 29th.

About 300 Hudson County students showed up to the Liberty Science Center on Monday to compete in the 58th iteration of Hudson County's premier science fair, and now the medal winners have been officially selected and listed.

The high school gold medalists presented their projects in the second round or "super‑judging" round Wednesday, and from that group, two finalists will be chosen to represent the JCMC/BH STEM Showcase at the Intel International Science and Engineering Fair this spring in Phoenix.

Finalists in the younger categories will also be chosen to advance to the Broadcom Masters competition in Washington D.C. in October.

Special award recipients will be announced next week. The following winners will be recognized at an award ceremony on April 5 at New Jersey City University:

BRONZE MEDAL: Bayonne residents Hasumi Hayashi, a junior at High Tech, and  Jessica Driscoll, a senior at High Tech, for "Effect of Varying Salinity and Biocatalysts on MFC Efficiency" and "Herbal Remedies to save Strawberries," respectively. 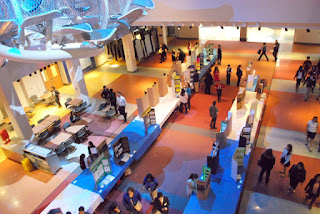