Skip to content
(Secaucus, NJ—March 8, 2017) In a wild finish to the 2017 Hudson County Academic Bowl, both High Tech High School and Secaucus High School shared in the glory of winning the championship title in this season’s quiz bowl competition, announced Dr. Joseph Giammarella, Principal of High Tech.
The High Tech Senior Quiz Bowl team, captained by Ryan Miller of Kearny, found team members Rakeeb Alam and Akash Ram of Bayonne and Kearny residents Jonathan Brooks and Kevin Shi tying Secaucus High School 210-210 after a controversial vote over an Academic Bowl rule.
“The Secaucus team claimed this rule never gets enforced,” says Miller.  “The advisors also said that one teammate wanted to help the captain out with pronouncing a word.”
According to the rules, each team designates a captain, who serves as the primary spokesperson for the team, prior to each match.  However, on the Secaucus High School team, a non-captain answered a ten-point question.  The questionable answer, based on the rules, didn’t figure into the calculation of the tournament until the final score, which had originally been 210-200 in favor of High Tech due to the sanction.  At the end of the championship, one of the Secaucus High School advisors objected to High Tech’s win.  So, based on a democratic vote, which favored Secaucus High School 3-2, the teams agreed to a tie.  No one suffered the agony of defeat this time around.

“We had three strong teams this year,” says a deferential William Kennon, Quiz Bowl advisor and veteran visual arts teacher at High Tech.  “High Tech should be very proud of the quality of our student population.” 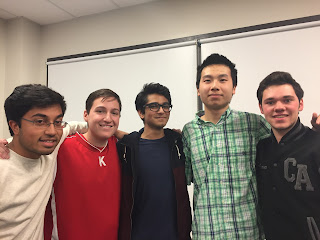