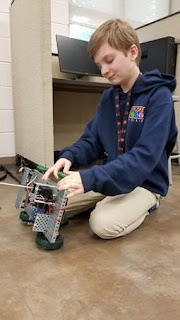 (Jersey City, NJ) Henrik Van Tassell, a first year student at Explore 2000 Middle School, has proven that his interest in technology equates to work that demonstrates his advanced knowledge, and skills in many areas of the 21 century learning environment.  Explore 2000 has had the privilege of providing the students with a robotics program where students solve real-world problems with their builds, and code their models to perform actions they require.  Recently we received upgrade kits for the Vex robotics sets, which included a competition controller, freeing the students from command based computer coding and its limitations.  The joysticks have 20 assignable button functions, and require more complex coding in the RobotC, a C based computer codding application.  Henrik constructed a transport vehicle with the Vex kit, and programmed the controller (joystick) allowing him to navigate the transport vehicle at the touch of his fingers.  Henrik has dubbed his work “Project Hayes”, inspired by the “Father of Wi-Fi”, Victor Hayes who is responsible for the international 802.11 standard that has made wireless networks possible.  It is this technology that allows the controller to communicate with the VEX cortex found on all models built by the students.

Henrik stated, “I originally built this transport car as an autonomous delivery robot, but when we received the joysticks, it became an RC bot.  The bot only required some modifications, and I think it is a great example for the S.T.E.M. camp students!  Although I have been experimenting with the VEX robotics kits, this vehicle is the first build that I designed and coded to be fully functional.  It originally was just an experiment, and I thought it would be a great project for the VEX joysticks.  It started very simple as just a two wheel drive car with sensors on the four corners, programmed to change direction when the sensor were bumped. When we received the VEX competition upgrade kits, which included the joysticks, Mr. Aziz, the Educational Technologist at E2K, urged me to incorporate the joystick into my design.  Coding the build was a bit challenging but I learned a lot about conditional statements, in addition we also used the Project Lead The Way forum to troubleshoot some technical issues that arose.  I felt the build needed an upgrade to four wheel drive due to stability issues, so I added two additional motors and modified the original code.  Lastly, I tested the performance of different types of wheels to see which would perform best and concluded terrain wheels created more drag and strained the motors more than the smaller, smooth wheels which I decided to leave on as the finished product.”

Explore 2000 would like to express sincere gratitude to everyone that has made the robotics program possible, with great success.  We are thankful for the support from our superintendents, Mr. Gargiulo and Dr. Sirangelo, the HCST Foundation and School Board, as well as our technology department for their dedication to moving our school forward as we set the pace for being the first vocational middle school.