Art Schwartz may be reached at arts@hudsonreporter.com

High Tech High School
Starting one day later than the other schools, High Tech will first introduce underclassmen to the academic environment on Wednesday morning, with upperclassmen joining later in the week. Teachers will spend the afternoons in professional development sessions for the first three days.
Work should begin this month on the new home for High Tech High School in Secaucus, on the site of the former Field Station: Dinosaurs park. The new county school is slated to open in 2018.
“Since we got the go-ahead with Secaucus we went forward with revamping all our programs, so when we move in three years we’re ready, because the facility is designed for academies,” said Assistant Principal Allyson Krone. “It’s pretty exciting. We’re making a lot of changes to the curriculum.”
High Tech has operated on the academy system for about five years now, according to Krone. Students select a course of study within one of four academies. “So when they come in from eighth grade they have this home within their bigger home, which is High Tech,” she explained. “It’s still one school, with a shared facility, shared gyms, and they mingle quite frequently in classes and extracurricular activities. But it’s totally interest-driven, based on whatever the child is interested in.”
The current academies are Digital Design and Fabrication, Performing Arts, Technology and Visual Arts, and Science and Technology, the latter offering focus areas in environmental studies or biomedical.
“We’ve added a lot of new components in programming and 3D animation,” said Krone of the Technology and Visual Arts classes. “Our biomedical program has been revamped to include more career exposure in pharmaceuticals and forensics.”
In addition to a working mechatronics lab, combining electronics, mechanical, pneumatics, and programming, the school created a new program in wood technology as part of the engineering program. “It’s based on a German model,” said Krone. “The students learn the basics of wood, and use machines to fabricate, becoming wood engineers.”
The technology wing was also remodeled. “We organized the TV studio and radio and computer programming and 3D animation so they’are all clustered together, all collaborating,” said Krone.
Also, the seeds were sown for a new academic program. Students can now participate in enhanced culinary arts courses, with a full culinary academy to be added next year. A restaurant has been opened on premises, the Blue Ribbon Café, where lunches are created by students, with student waiters.
“This year it’s for faculty only, although the students in the program will likely be able to participate,” said Krone.
“We’ve done a lot of work this year to prepare to move,” she continued. “So that gives us the ability over the next few years to work out the kinks.”
Read more: Hudson Reporter - School s in North Bergen and Guttenberg schools prepare to open 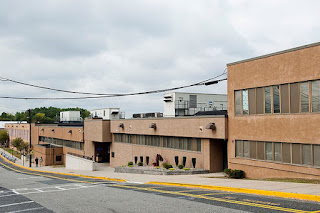