Inching around assorted debris, the robot crept forward to rescue the pair of climbers caught in the avalanche. Built of exposed metal beams, gears, motors, wires, and a hydraulic arm, the two-foot-tall robot towered over the three-inch climbers.

“This is our competition robot,” said High Tech High School (HTHS) Senior Jing Bao. “We’ve worked on it since the beginning of the year.”

So far the robot had won two awards and was on its way to another competition in South Jersey. But first it was making an appearance at STEM Day at HTHS on Wednesday, Feb. 10. STEM stands for science, technology, engineering, and mathematics.

High Tech is the county’s public high school, based in North Bergen. It draws students from all towns in the county.

The school has held a STEM Day for two years to coincide with CTE (Career and Technical Education) Month in February. This year there was something additional to celebrate, with the launch in 2015 of the High Tech’s Digital Design and Fabrication Academy, known as D/FAB.

The 220 students in the D/FAB academy offered demos and presentations on their various disciplines over the course of the day, including showing off the robots created by three teams in the robotics class.

Also on the agenda were four presenters offering students information on various topics including industry and study programs.

The freshmen take introductory courses in all of the available disciplines.

_____________
“It allows students to go from digital design into actually making their creations a reality.” – Alba Simon
____________
“They go through architecture to get their fine art and better development in their graphic abilities,” said Engineering Technology Instructor Sergio Gamarra. “In industrial design and animation they learn such things as orthographic drawing, dimensioning, 3D printing. Then they have the robotics portion where they actually learn programming.”

In their sophomore year students choose two of the disciplines to study in more detail before selecting a major to specialize in during their junior and senior years.

In Gamarra’s class the students learn to work with metal and machining equipment. “I also teach the students mechatronics, the marriage between mechanical and electronic engineering,” he said. “It’s used to solve manufacturing problems. It’s pretty much robotics for manufacturers.”

As an example he described an assembly line where quality can be maintained by a person, introducing the possibility of human error, or a machine, which is more efficient. But even machines need human overseers, and that’s where mechatronics and HTHS come in.

“We’re training the students to be able to understand how these pieces of equipment work and how to keep them running,” said Gamarra. “Because as with any moving part, they’ll wear out. Something will fall out of adjustment.”

From design to fabrication

Gregory Simon has been teaching architecture at High Tech since the school established the Academy of Architecture and Contemporary Themes (AACT) in 2005. “Two years ago we expanded to include other industries that were more broadly based, connected to design and fabrication,” he said.

That resulted in D/FAB, which Simon now supervises, pulling the different disciplines under one umbrella. One big change is the introduction of more manufacturing technology, like using CNC (computer numerical control) to program a plasma cutter and cut intricate designs out of metal.

“We are challenging ourselves to collaborate,” said Simon. “When I’m working with the wood technology teacher, I’m thinking about innovative designs of space and form. He can help me to fabricate those.”

“Before D/FAB we just had the digital design aspect of it,” explained Alba Simon, the teacher for industrial design and animation and facilitator for robotics. “Now we have the fabrication aspect due to all the new technology that the school has purchased. It allows students to go from digital design into actually making their creations a reality.”

“They give our kids internships,” said Assistant Principal Allyson Krone. “They need skilled workers and that’s why they’re tapping into our kids,” with the hope that the students will be pre-trained and inclined to take jobs at EMI upon graduation.

Former EMI employee Roman Malantchouk was among the speakers at STEM Day. Malantchouk is an entrepreneur in Hoboken with the firm walkTHIShouse offering interactive 3D models, floor plans, and architectural design, among other things.

Also speaking were Jazlyn Carvajal, the director of finance for the Latinas in STEM Foundation; John Cays from the NJIT College of Architecture & Design; and Tiffany Onorato from Stevens Institute of Technology.

“They came and talked about all the pre-college programs, and the students literally came running to me saying, ‘I want to sign up for this,’” said Krone.

“A lot of these students think they know what an engineer is but don’t understand that there are so many different pathways,” said Gregory Simon. “We’re trying to build that in early so that they have a better understanding once it’s time to make decisions regarding their education.”

Art Schwartz may be reached at arts@hudsonreporter.com. 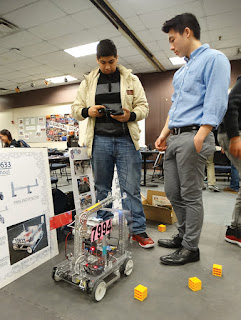 To see more images, please go to the following link: