Skip to content
(May 30, 2017--North Bergen, NJ) Renowned actress of film and television, Ann Robinson, paid the High Tech Performing Arts students a visit, sharing her remarkable life experience in show business, announced Dr. Joseph Giammarella, Principal of High Tech High School.
Robinson offered the High Tech Performing Arts students an oral history of her rise to Hollywood, from playing an extra to signing on as a studio performer for Paramount Pictures and Warner Bros. Studios.
Robinson's breakthrough role came at the age of 19, when she landed the role of Sylvia Van Buren in the 1953 cult classic, War of the Worlds, starring Gene Barry.  She has also starred in the 1954 film Dragnet, starring Jack Webb, which launched the popular, long-running TV show from 1951-1959 and 1967-1970.
Robinson has also acted in the Doris Day thriller Julie (1954) and 1959's imitation of Life, as well appearing in guest-starring roles for such popular TV fare as Alfred Hitchcock Presents, Ben Casey, the George Burns and Gracie Allen Show, Perry Mason, Peter Gunn, Gilligan's Island, Adam-12, and Police Woman.  She has appeared in hit soap operas as well, including General Hospital and Days of Our Lives, and many TV commercials.
Her grandson and granddaughter, High Tech sophomores Sam and Victoria Bravo of Hoboken, introduced Robinson to the students.
"Really listen to your acting partner and really respond truthfully," says Robinson, offering seasoned advice to the budding thespians at High Tech.
When asked if she ever felt discouraged in Hollywood, Robinson responded in the negative, chalking up not getting a part to something mundane, like the color of her hair or her height, not due to a lack of talent.  In addition to speaking on acting, Robinson offered interesting anecdotes as well, as when she attended a private screening of A Star is Born in Jack Warner's Hollywood mansion in 1954, and had the good fortune to be seated next to the legendary Judy Garland.
In 2005, Steven Spielberg offered Robinson a cameo in his re-make of War of the Worlds, starring Tom Cruise and Dakota Fanning.
"Even though [Robinson's] credits and significant achievements have been many, it was her profound wisdom, sense of humor, and authenticity that the High Tech Performing Arts students will treasure most," says Deborah Arters, Director of the High Tech Drama Department. 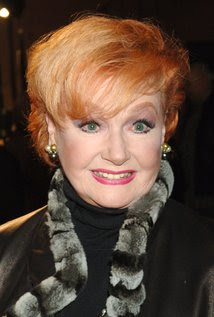